Having made it successfully through Customs at Nuevo Laredo, we headed south and found the traffic slowed for a check point. Young men in uniform, with guns, looking completely serious, checked us over lightly, as well as the contents of our vehicle, asking where we were headed. “Lake Chapala,” we answered. The head man, who looked about 18, waved us through. And thus began our destiny, for to us it seemed that we had left Kansas behind and were now traveling on a yellow brick road headed for Mexico’s largest lake. 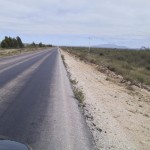 Our choice of free roads (libres) wove through villages and mountains as we headed for Monterrey. We rode behind trucks too heavily loaded for their state of repair, coughing black soot as they inched upwards so slowly we wondered if they would ever make it to the peak. One did not, and although there was some delay, we managed to get around the little truck that tried…but couldn’t.

The following day we headed off again, still on a libre road until suddenly, there was a detour for road repairs. Rough road on the detour, however, slowed our progress and kept us alert to our location and direction. But the distraction led to a sudden lurch. We were towing a car dolly with a small Chevy attached. Alas, the bumpy road had jarred loose the ball from the trailer hitch. Although there was a safety chain, it broke loose. The trailer and my little car went shooting across the roadway to the edge of a precipice while I gasped with horror.

Five trucks pulled over. Men jumped out of their trucks and came to help, one directing and the others doing the work of pulling the car dolly back up onto solid ground, then reattaching the trailer hitch and securing it firmly. They had tools and know-how, and it didn’t matter to them who was in trouble in the mountains. They were there to help. I instantly fell in love with the people of Mexico.

The Autopista and Toll Roads 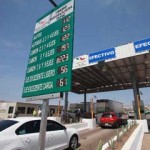 The remainder of our journey went smoothly. Some mountain roads were slow because they were heavily trafficked while new toll roads were under construction. Once we were on a toll road (cuota), we sailed along, observing the magnificence of Mexico all around us.

Since that initial foray into the interior of this grand country, I have travelled from Lake Chapala to Mazamitla, Guadalajara using the ring road (periferico), Tequila, Puerta Vallarta, Manzillo, Colima and Comala and other destinations, following whichever roadways were direct, clear and open. I have been redirected around road crews maintaining the finest highways I have traveled since leaving Canada. Sometimes I have traveled on my own, a woman of retirement age with limited Spanish, and I have encountered very good roads, helpful officials at toll booths, and smiles along the way. Mexico is a lumpy land, and building highways has enabled prosperity and national growth by moving people and goods.

There are “green” patrols on the cuota roads. They look out for vehicles and passengers in trouble. For free, they help with tools and most commonly needed replacement parts, and those beautiful smiles. But that’s not all that’s good about the toll roads.

There are rest points, gas stations and snacks available at various places, and bridges are announced with huge signs that show how deep the canyon is that you are traversing, usually with a single lane each way. Do not become impatient and attempt to pass. It is a long way down many of those canyons, and trucks take the cuota roads because it is faster, sometimes faster in their direction than in yours. Even with the tolls, truckers find it cheaper to make the run on those direct, well maintained, cuota roads.

Toll roads are not usually enclosed with fencing and in some areas, like around Ciudad Guzman, you drive around the city along what appears to be a country road. I happen to like that drive. It is peaceful, and I don’t care if we slow down for a while.

Road between Lakeside and Colima 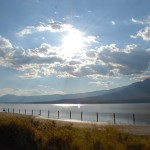 There are also dry lake beds along the cuota road between Lakeside and Colima, or northwest of Colima perhaps to the turnoffs for Sayula or Tapalpa. The dry lakes are not always dry, depending on the season and the amount of rainfall. They might be foggy or covered with windy blasts of sand (talvaneras) formed in what we call dust devils or whirlwinds – they can be fierce, or mild.

Rain is quickly absorbed elsewhere, but dry lakebeds are harder than concrete and so there are patches that hold water a few inches deep for weeks. There you will find plants have sprung up and kingfisher birds are sitting watch. The birds are there for fish. Fish in a dry lake? Nature has provided a clever technique for their survival during the dry months; they become imbedded into the soil as it dries, and when released with sufficient rainfall, the fish revive and the once dry lake bed teems with life once again. Every year I watch this cycle, thrilled with the country I have chosen as my own.

Whether you are inclined toward geology intentionally or simply curious about the rock formations and colorings, you will notice the variations, the twists where the land was bent and lifted. But also notice what has been painted on overpasses – they provide safety jingles for local drivers, many of whom have little sophistication with driving safely under all conditions. I carry a small Spanish-English dictionary for that, for finding the right turnoffs and words like talvanera. 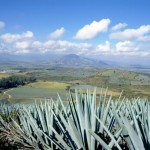 If you drive the road to Tapalpa, and I recommend you do so, you will also notice terraced levels in the land above the dry lakes from the time when Lake Jalisco covered 8500 square miles after the last ice age. Over 10,000 years Lake Jalisco shrank to what we now know as Lake Chapala, one tenth the size of the original lake. While you ascend the mountains into the area of pine trees around Talpalpa, you will also see signs guiding you to gigantic boulders flung vehemently from the throat of volcanoes like Colima during more active years.

The road to Tequila is well, pretty, definitely farmland. But I prefer the libre roads. Not only are there small tequila distilleries to be found and Magdalena with its opal mine, but the Guachamontones are located off one of the libre roads near Tequila. They are a recent discovery of an ancient civilization. The Guachamontones are rounded pyramids, not as dramatically high as those in Chichen Itza, now one of the seven wonders of the world, but the Guachamontes served a more peaceful purpose. True, the pyramids show no signs of having been used for sacrifices or for power struggles. However, the ball court as laid out, reveals more than just how the game was played, for the contest was not as peaceful as a modern soccer match – the losers lost their lives. It was how significant social issues were resolved, leaving little doubt that ancient sports began as a replacement for war and that even modern sports heroes are, essentially warriors.

Roads towards Manzanillo and Puerto Vallarta 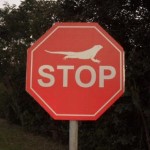 Once as we drove from Puerto Vallarta to Manzanillo, we drove highway 200, the usual route. We encountered iguanas sunning themselves in the middle of the road, critters large enough to make a driver hesitate before even considering driving right on over them. In Florida we considered alligators big enough to flip a car and these iguanas were marginally similar in size. We drove slowly around them until we were stopped by a village where string was strung across the road for begging from those passing by. One wanted handouts for school activities. OK with us, no particular amount requested, just a smile, and we were on our way. Another had a cripple in a wheelchair, and the need was obvious. To them a few pesos from each vehicle, even on a day when there were few, was a means of providing for themselves and family.

There are many sights to see. You will find more tropical views on the coasts and farther south, raw land and volcanoes in the strip between the 19th and 21st parallels, raging rivers, farm land, both modern industrial design or farmed by ancient wagons drawn by animals, driven by people with bare feet. This country is a joy to drive over and above its cultural history, but that, too, adds to its flavor.
Don’t even hesitate. Drive. Stop often. Talk with the local people, if not in Spanish, with hand signals and facial expressions. They will laugh with you, help you, guide you. And you will make new friends.