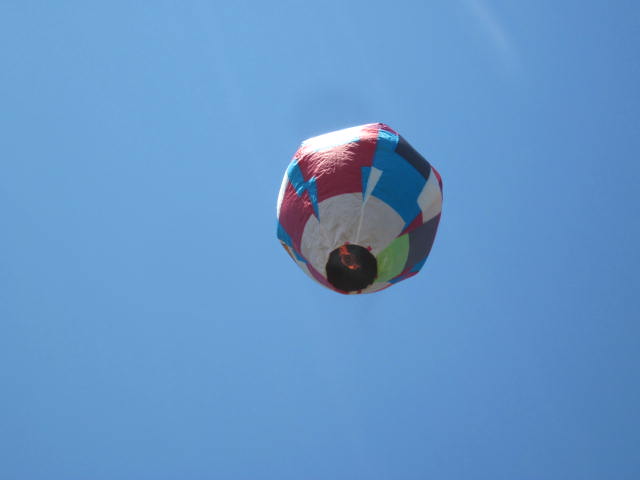 The hot air balloon race is always held on the Saturday before Independence Day, which is September 16th.   It is held at the soccer field on Calle Revolucion. It is half a block down from El Torito grocery store and the movie theater in Ajijic. This event is the beginning of the Fiesta Season that lasts until after Easter. Life is very exciting at the Lakeside area during this time of the year.

Every year more people enter the globos competition. The crowds also grow.  If you want to get a seat in the bleachers, you have to arrive at least an hour before it begins. Many people bring their own chairs and sit out on the field. There is no entrance fee but they have a box out for donations to help defray the cost of the next year’s competition.  The winner of the race is the balloon that goes higher, further away and stays up the longest.

There are no prizes except the pride of winning. Many times the balloons catch on fire and never get off the ground. The larger balloons are more likely to do that, as they are so fragile. The globos are made out of layers of tissue paper which are glued together with white glue and pasted on wire frames.

There is a hole at the bottom of the globos. A fire is set and the globos are held over the fire until they blow up and then they are set off, if they don’t burn up first. Or else a kerosene soaked cotton or rag torch is set on fire and then held under the hole in the balloon until it fills up with hot air or burns up. Hopefully, it doesn’t catch on fire.

There are many food booths, both outside and inside of the stadium.  Also, enterprising people walk through the crowds selling food. There is no reason to go hungry at this event.

It is a photographer’s paradise. Thousands of people wander around on the field and watch the action from the stands. It is a great place to meet up with friends and make new ones. Everyone is friendly. There is a mutual camaraderie in feelings of awe when the balloons make it off the ground and group groans when the balloons catch fire.  It is all very exciting.

Teams create the balloons. The teams are schools, or businesses or just friends having fun. Several weeks before the regatta, the teams spend their evenings gluing together the thin sheets of tissue paper and creating elaborate designs. The larger and more complicated the balloon, the more likely that it will quickly burn up.

Sometimes the globos float into fields and burn the crops. If the farmers can find the names of the owners on any unburnt section of the globo, they will demand payment for their crops from the owners.

Sometimes the balloons fall on the roofs of nearby houses and things catch on fire. There is always a bit of danger involved. If a globo catches on fire as it is leaving the field, the people below scramble to get out of the way of burning tissue paper that is falling back down.

Years ago, the balloons were made out of old newspapers. A small balloon can take four hours to make and the larger ones will take much longer.

There must be a sense of disappointment from the creators of these masterpieces when they burn up even before they are off the ground. But that is always anticipated. It is part of the fun. It is an exercise in creation and destruction, a truly ephemeral art form. We cannot control the outcome. We just create and hope for the best.

Policemen were there but it was a very peaceful crowd. Everyone was just enjoying the beautiful afternoon.

There was a band and also a group of women dancers. Outside of the soccer field there were people sitting on the steps, watching all the action.

The globos were being sent up for several hours. Many people left before it was over. I was one. I couldn’t sit on those cement benches any longer.  This was my second year of watching the globos. I am already looking forward to next year but I hope I will remember to bring a pillow to sit on next time.