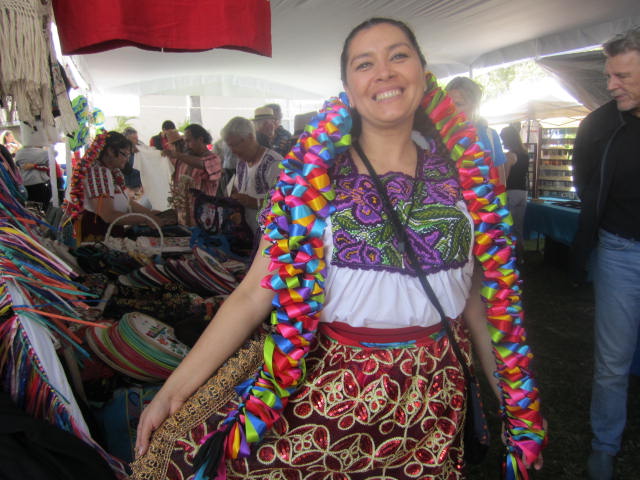 The Féria Maestros del Arte was held again at the Chapala Yacht Club on Friday, Saturday and Sunday, November 8th, 9th and 10th, 2019. This was their eighteenth year of the fair. Once a year artisans come into the area from all over Mexico. They stay with local families or individuals. This is a wonderful opportunity for cross-cultural bonds to be created between artisans and hosts.

It is a non-profit event. The entrance fee of 80 pesos goes to pay for next year’s fair. Artisans usually wear their regional clothing. The woman in the above photo posed for me. Those long strands of ribbons were wrapped around her hair.

These musicians played at the entrance to the fair. There were musicians, dancers, lectures and demonstrations throughout the three days. All entertainment was included in the entrance fee.

There were 86 groups of artisans. The show is entirely free to the invited artisans. They keep the profits from their works. Each booth would carefully wrap and ship their crafts to anywhere in the world.

The artisans in the above photo were wearing their traditional clothing. It was a hot day and those fur vests must have been uncomfortable. But they didn’t seem to mind. They were all smiles for me.

There were two hundred volunteers working to make the show a success.  They are always looking for volunteers. It takes a lot of work and coordination.

I went on the first hour of the first day and it was crowded. The people in the above photo were smart to get away for a little while.

Some of the artisans worked on their crafts during the show. I liked watching them and learning something about all the work and time each object took to create. The prices were small compared to how much time each one took to make.

Tables and chairs were set up near the pool for the food court. I had a piece of chocolate cake and a cup of coffee.  Some booths were selling lunch.  The Hamburgers looked delicious.

The  pretty young woman in the above photo was keeping the artisan company while he painted his creation.

Pottery was second largest in display. Ceramics and ceramic figures were abundant.  But the most displays were clothing and textiles. There were also baskets, gourds, guitars, jewelry, dolls and toys, shoes, knives and many other things. Always a surprise to come upon something new each year and new artisans.

The Huichol Indian in the above photo was in the process of creating a yarn painting. I had no idea of how labor intensive it was for one painting to be made.

The above yard painting has the symbol of payote buttons in it, in the center and smaller buttons at the bottom. I love these paintings.

The above painting is also made with colored strands of yarn. It contains symbols of buttons, corn, payote flower, rain and many other sacred symbols.

Catrina dolls were also in abundance at the fair. By the last day, not many were left.

Many different masks were displayed. I liked the white face in the above photo.

Donna Williams, coordinator of the Féria, was busy talking to her helpers but she took the time to smile at me.

There were many raffle prizes. Each booth donated one prize. Several are displayed in the above photo. Each day there was a raffle drawing. If you bought a ticket on Friday, it was put in the barrel for Saturday and also Sunday. Lots of chances to win.

The raffle money went to Operation Feed which is a non-profit organization helping 96 poor families in San Juan Cosala. It delivers food each week to them and helps them find new income sources. If you would like to donate 1,000 pesos a month to help, please contact Jeannie Winston at jeanniewinton@rocketmail.com

I always enjoy seeing the large ceramic animals that roam on the yacht club grounds. Those too are carefully wrapped and shipped around the world.

As you can see from the above photo, the crowd was thick. I guess people want to go the first hour of the first day in order to buy the best pieces before they are gone.

Next time I must remember to arrive later in the day. It wasn’t easy getting through all the people to see the booths. Fun but very cosy.

I decided to add a little humor here at the end. I was tired from the sun and crowds but I had to laugh at these cups. Each year I see new crafts that never cease to amaze me. I hope you made it there this year and if not, maybe next year. It is well worthwhile.

If you would like more information, go to: www.feriamaestros.com

0 thoughts on “The Feria Maestros del Arte in Chapala 2019”