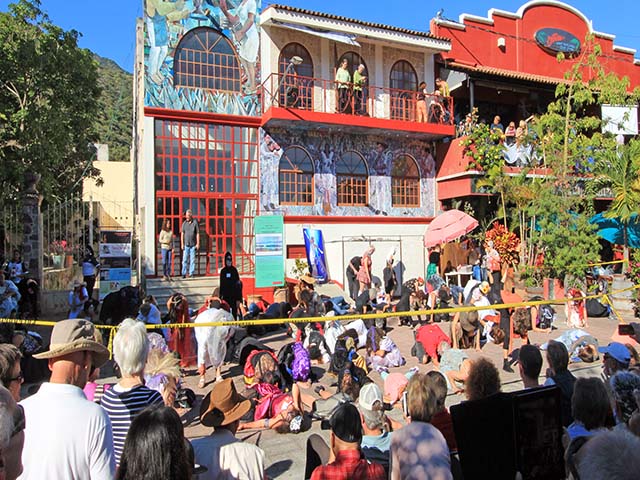 Michael Jackson’s Thrill the World Dance was created by Ines Makeljevic. She was the creator/founder and Director of the event that was started in 2006 in Toronto, Canada. Now it is in six continents. Anyone can join the dance. This year they started practicing on September 10th, from one to three in the afternoon at the Club Exotica, above El Jardín in the Ajijic Plaza.

If you can’t make it to the rehearsals, you can learn the steps from the web site, www.thrilltheworldbayapa@gmail.com The photo above is the only one that Ramon managed to take because there was such a large crowd in front of the performance area.

Before the dance begins there are makeup artists who do wonderful jobs of turning regular people into scary vampires. Wouldn’t you like to express your hidden side? Then join the fun.

Most zombies are either scary or happy. This is the first sad zombie I have ever seen. Maybe he lost one of his zombie friends during the dance.

Every Thrill the World dance is to raise money for nonprofit organizations. The one in Ajijic is for the Red Cross. I don’t know how much money they raised this year. I hope it was enough to keep it in operation. We need the Red Cross. Just ask any very sick person how their lives were saved by them.

Friends to the end and beyond? As of last year there were 4315 entries. Total registered events were 120 in 12 countries. The highest number in one event was in Redmond, Washington with 234 dancers. Then Eugene, Or. with 189. ANd then Calgary Alberta, Canada with 182. The lowest number was in Lauderhill Florida with 1 dancer. GOOD FOR YOU One Dancer……the onlookers must have assumed that it was just a crazy person out there dressed like a vampire and dancing on the sidewalk.

More zombie friends, although the girl on the right looks more like a cat…. maybe there are also zombie cats?

I am glad that Ramon took the photo above. She was too scary for me. I took the next photo, That is more my style. No nightmares from a sweet litte girl in face makeup.

I took the next to photos. I was using my i pad and it did okay if there were no moving objects. But I miss my camera. There were some Catrina dolls around town but not like it was two years ago. Maybe they were just too difficult to make. I was able to take photos of the Catrina below because they were not moving. And people weren’t crowded in front of me. The dance this year was so crowded that it was almost impossible to see unless you happened to be a VIP… I don’t know what being a VIP entails but it meant that you had roped off chairs, perfect views of the dance. these VIPs cost 500 pesos. Maybe that is the way they figured out how to raise money for the Red Cross. Good for them.

The above photo was taken in the area that leads into the main part of the plaza. You can see the huge crowd that has already gathered in the background, waiting for the dance to begin. It was impossible for me to see it through the crowd.

The last picture I took was of this stand, selling all the masks. It seemed like a perfect place to buy a mask if you had forgotten one. Ramon Perales took the next photo of Santa. Maybe to remind children to be good before Christmas.

The next two photos were taken by my friend Pat Yarbrough. She was kind enough to let me put them in this article. Unfortunately, my camera broke last week and all I had was my i pad. It was too large for me to try to use in that crowd of onlookers at the dance. Most of the photos I managed to take were very bad. But it was fun anyway.

How would you like to have the children above enter your bedroom in the middle of the night, all dressed up in their costumes?

After the dance people got into cars and paraded to six corners.

Of all the zombies I have seen through these years, this one in the above photo is the prettiest one. Watch out men. She may be the most dangerous. Her beauty could just be a trap.

Now the one in the above photo would not be mistaken by a long shot.

I liked seeing mature people involved with the event. I didn’t feel so out of place that way.

These costumes seem to bring out the dark side of the zombies. I wonder what they are like without their costumes and make up?

One thought on “Thrill the World Dance in Ajijic 2016”