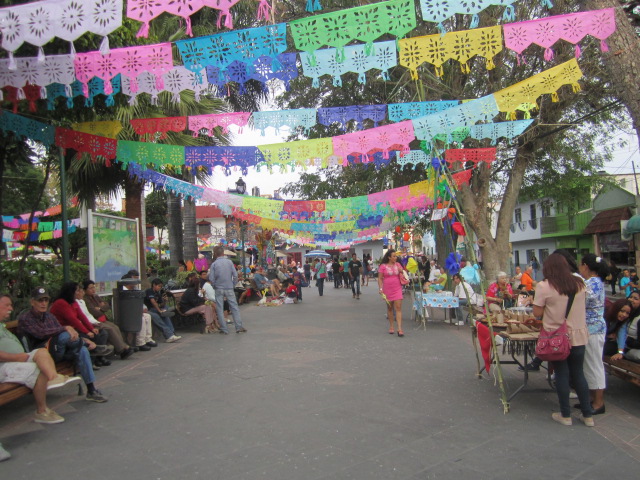 Palm Sunday this year was on the 20th of March. It will be an  early Easter. There were many things going on at the Ajijic Plaza on that afternoon and evening. A Verbena Event, which is a food event where all the food is traditional Mexican food prepared without electricity or any synthetic materials, served on baro plates. These plates are made out of red clay. And then later on in the evening there was the procession of Jesus coming into town riding on a donkey.

Some of the food: Tacos, Sopes, Enchiladas, Pozole, Tamales, Fruit water, rice pudding, and many other delicious dishes. The man in the photo below is showing me his meal. Also, I wanted to get a photo of the woman standing behind him with the beautiful Palm icons and flowers.

All the food looked good. I only saw one dish that wasn’t served on the traditional baro plate.

No matter what kind of plate the food is served on, it is still delicious.

The stand below was a very popular one. The Verbena celebration is a fund raiser each year to pay for the passion play that goes on throughout Easter week.

Below is a photo of two of the charcoal brasiers that they used for cooking.

Behind the stand in the photo below is a bouncing area for the children. There were also small rides. Looks like that little girl sitting by her mother would have preferred to be in the bouncing room.

Below is a photo of the traditional Pan Dulce, sweet bread, made at Easter time.

The locals know the bread as “Tachihual” and you can sometimes see street vendors selling it hot and fresh straight out of a wheel barrel.

These three little girls had a baby bunny trapped between their legs. Happy Easter. Maybe not so happy for the bunny.

A band played most of the evening in the gazebo. Some of the people were dancing to the music. But it was too crowded to really kick up their heals.

The icons are pretty. I bought a couple of them.  But they are also fragile. My friend said they wouldn’t allow her last year to take one home on the airplane, something about seeds, etc. Spoil sports.

The little girl in the above photo was so pretty that I took several photos of her. I showed them to her. She was pleased with them. Maybe she never realized how beautiful she is until seeing the photos.

Above was the fanciest icon I saw on the plaza. I wonder how long it took to make.

The two boys in the above photo were selling the palm icons. They cost about twenty pesos each. How could you resist faces like that?

The little girl in the above photo was so cute and happy that I couldn’t resist putting it in the article. Especially after the photo of the sad little boys. She had been chasing after the cat for about an hour, running between everyone’s chairs. The poor cat had escaped from her and was doing a pretty good job of hiding out, until the little girl caught her/him. I can’t know much about cats. But I do know an unhappy one when I see it, be it a boy cat or a girl cat.

I wonder if the little boy was just discovering the Easter eggs filled with confetti. He was studying that egg so intently. But then, probably his sister, filled him in on it. See next photo.

If you ever had an older sister or brother or if you ever were one, the above photo might look familiar to you.

The people in the above photo are regulars at the plaza, cooking their corn the traditional way. They didn’t need the Verbena celebration.

The procession was quiet after all the noise in the plaza. If you weren’t a religious person before witnessing it, you might change your mind seeing the power of it.

I don’t know the meaning of the white flags. Check out the somber expressions on peoples’ faces in this procession. It was a serious experience for everyone involved, either as part of it or watching it.

It was a long procession. People walked in it carrying the palm icons, babies, flags, and flowers.

Time to go home for this little tyke. Me too.

If you are ever in Ajijic during Holy Week, I hope you will not miss all the festivities that go on here. It is exciting and inspiring.

Leave a Reply to Kristina and Allan Chase Cancel reply

4 thoughts on “Palm Sunday and Verbena Celebrations in Ajijic”