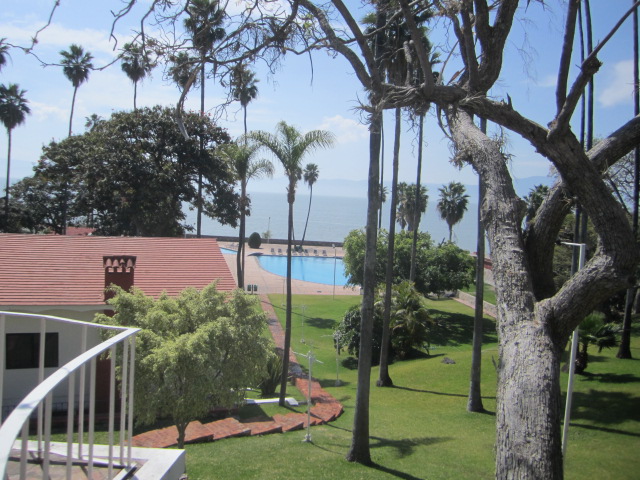 A Taste of Wellness Seminar and Workshop was held at the Monte Carlo hotel in Chapala on Saturday, February 22, 2014. It started at seven in the morning and lasted until four in the afternoon. This is the first in a series of seminars and workshops to be held in the future. The future dates have not been arranged yet.

The group leaders were Diane Bucaro, M.S.W. and Dr. Jim Jaramillo.  Since this was the first workshop and not many people had heard about it, there were only seven of us plus the two leaders. But that made for an intimate group and a more informal atmosphere. We all had a chance to get our questions answered. The cost, including two meals and use of the pool and hot tub at the Monte Carlo, was only 300 pesos each. It was well worth that price.

If you have never been to the Monte Carlo, it is worthwhile to take a walk on their grounds. From the street it looks like nothing interesting. But, like many other places in Mexico, you enter to spectacular grounds. (For a minimal price, they will let people come in and use their pool and hot tub. Ask about it at the front desk.)

This workshop and seminar was sponsored by The Longevity Center in collaboration with Support Centers International (USA). Tom McClure was instrumental in all aspects of the development of it. His main interest is in helping people to get over bad eating and living habits and creating healthy ones.

Diane Bucaro presented many interesting ideas in the morning. We were given fruit, coffee and granola for breakfast. We ate it while listening to Diane’s talk on the health benefits of gentle and mindful eating. Throughout all her talks, she stressed MINDFULNESS—Mindful eating, Mindful walking, etc. Take a bite, put your fork down and chew at least twenty times before you take another bite.  Diane said, “Don’t do anything else while you are eating. Eat only one thing at a time. Be at one with your food.”

The above photo was taken before the workshop started.  I really enjoyed the room where it was held. It was very large and bright with windows that opened up onto a beautiful deck on three sides. Diane and Tom were talking about the organization of the day in the above photo.
Tom has had years of experience as a workshop organizer. He was very helpful for everyone throughout the day.

Diane taught us how to use mnemonics to help us remember names and numbers. Mnemonics is a system of memorizing. Each number is represented by a different image. Such as, number one is a candle. Number eight is a snow man, etc. So, if someone tells you that he is 18 years old, you would remember a candle and a snowman. It is easier to visualize that than it is to remember the number.

When someone tells you his or her name, you associate the name with something else in your mind. For example; Pat Walker, could be associated with a person walking and patting herself while walking. Pat=Patting.  Walker=walking. Do you get the idea? (Just don’t forget and call me Patting Walking instead.) That is how we learned everyone’s name in the workshop.

Emphasis was on learning how to go beyond our mind chatter and connect with our intuitive selves. Diane said that the new health practitioners are now integrating Western medicine and philosophy with Eastern medicine and philosophy. She said, “We need to go beyond the level of the mind. Thinking is outmoded. Wisdom is beyond the self. We need to learn how to use both the right hemispheres of our brains and the left hemispheres. The right is the intuitive side. The left is the rational, thinking side.”

To connect us to our right hemispheres, we were given ten minutes to walk in the gardens. That was a special time for me. I found these beautiful statues and spent some time looking at them with the warm sunshine on my back and the cool breeze under the shade of the trees. I was experiencing my right hemisphere with great pleasure.

These lion statues were very expressive. I thought about a statistic that Diane had given us in the lecture while I looked at the above lion. One in eight people after age sixty five will have Alzheimer’s Disease in the United States. One in eleven in Canada will have it. If that isn’t a sad statistic, I don’t know what is. (And why do Canadians have less risk of getting it? Maybe because they have better healthcare? Or less stress? I  don’t have the answer to that question.)

So how do we keep it from being that one in eight or one in eleven? That question cannot yet be answered by medical science. But Diane had many ideas to help us maintain our memories as long as possible, including eating right, and “Living in the moment”.

Later on in the day, Dr. Jim Jaramillo gave us a lot of information on Alzheimer’s and things that sometimes appeared to be Alzheimer’s but were other problems. He also gave us information on the kinds of drugs that doctors are now using to help people with this terrible disease. There were nine of us in the workshop. Most likely one of us will one day have Alzheimer’s. Sad indeed. I hope it isn’t me.

Dean Niles, believe it or not, is eighty three, almost eighty four years old. (Picture a snowman and two commas, one on top of the other, 83) He was one of the participants. He is a yoga instructor here in the Lakeside area. He gave us some exercises to keep our minds active. The one pictured above was to help balance the left and right sides of our brains.

I am guessing that he can be eliminated from that one in eight statistic. His mind was sharp. He had much to offer the workshop and Diane said that in the next one, he would be welcome to sign up as one of leaders. He sure inspired me!

We took a break for lunch at noon. Lunch was on a deck overlooking the lake. First was the salad which was simple and presented well. I took a photo of it but then forgot to photograph the main dish. Or maybe I didn’t forget. It might not have been early Alzheimer’s but rather a lack of interest in it. I do not fault the organizers of the workshop on the meal. They told the people at the Monte Carlo to serve a healthy meal. The only thing the cook could come up with was a dish of boiled vegetables mixed with chunks of bland chicken breast. No spices. No wonder people don’t want to eat healthy if that is the only thing they can imagine. (This meal reminded me of a diet called, Don’t Eat Anything You Like Diet.  It works but what a way to lose weight!)

I hope the future workshops will have more interesting meals. Just because something is healthy, that doesn’t mean it has to be bland and boring. This is only my opinion. Others may have liked it. Since it is my article, I get to say how I felt about it. Diane did say that she would like to do an entire section on healthy recipes in the next workshop, focusing on the exotic fruits and vegetables of Mexico.

Even though I didn’t like the main dish, I enjoyed talking with the other participants of the group. There were people from all walks of life and with many different interests. The youngest person in the group was a 22 year old Mexican man. (The number 2 is a swam. Remember two swans together. 22.) So we had quite a stretch in ages–from 22 to 83, almost 84, years old.

Later in the day, Dr. Jim Jaramillo gave a lecture on ways to overcome obesity. Obesity is the number one health problem in Mexico. He talked about how obesity affects all the organs.  He gave suggestions such as medication (diet pills), bypass surgery, gastroplastic surgery, lyposuction, etc. (One way would be to eat like our main dish at lunch.  Just throw everything into a steamer, let it steam for awhile, take it out and eat it. Easy but boring.)

“Every addiction arises from an unconscious refusal to face and move through your own pain. Whatever the substance you are addicted to–alcohol, food, legal or illegal drugs or a person–you are using something or somebody to cover up your pain.” 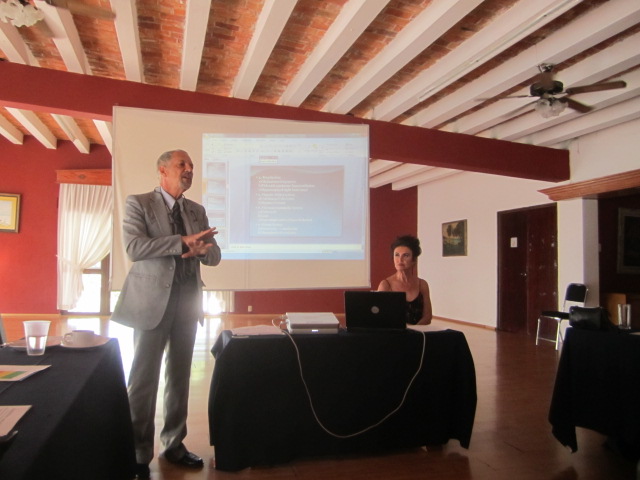 Dr. Jim JaramilloWhat other health problems do people have besides obesity? How about sleep problems? Dr Jaramillo discussed this in depth. Sleep is essential to good health. Drug addiction is another problem. Surprisingly, many older people become addicted to street drugs or prescription drugs. Then there are all the problems associated with DEPRESSION. He said that forty five percent of deaths are caused by loneliness. That is a higher mortality rate than heart attacks or strokes. SHOCKING! It has a name now. The Loneliness Syndrome.

There have been studies on the Blue Zones, which are areas where there are large numbers of people over a hundred years old.  Some of the habits of long lived people are: living naturally, having a purpose, eating moderately and slowly, eating a plant based diet, drinking a little wine (I like that suggestion), living a slow pace (I like that one too), putting family and friends first and having a sense of belonging to a group.

Here is some good news: It has been discovered that only twenty five percent of longevity is based on your genes and seventy five percent is based on your life style and mental attitude. So we all have the power to give ourselves longer lives……  Stay away from sugar, don’t overeat, don’t smoke, exercise the natural way, have a good attitude, have the ability to adapt, don’t live in the past, go with the flow. Those are all the qualities of long lived people.

After the workshop we were free to wander the grounds, swim or get into the thermal pool. It was a relaxing afternoon. If you are interested in attending the next workshop or you feel you would like to be part of the planning, please contact: Diane Buscaro,  E mail: didybuc@gmail.com

Remember: MODERATION IN ALL THINGS.  GO WITH THE FLOW. BE AT ONE WITH YOUR ENVIRONMENT. STAY CLOSE TO FRIENDS AND FAMILY.  DON’T SMOKE….  You will live longer if you do these things. (I hope you will come to the next workshop. You might learn something that could save or prolong your life. That would be well worth the price of the workshop.)

One last bit of good news that has been scientifically proven: SEX IS GOOD FOR YOU!  It is good for the mind and body. Unfortunately, thirty  percent (or more) of older people aren’t having any sex. Let’s try to lower that statistic. We don’t want to die of the Loneliness Syndrome!

“ENLIGHTENMENT IS THROUGH THE BODY.”  Eckhart Tolle