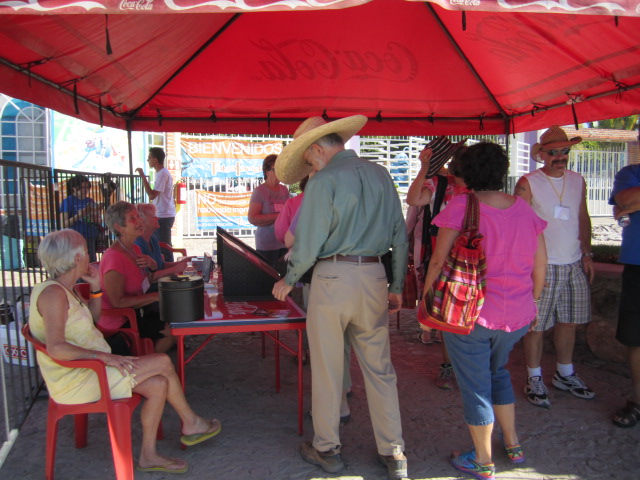 The 35th Annual Mexican National Chili Cook-Off was held on the 22, 23,24, of February in Ajijic, Jalisco, Mexico. Their hours were from 11 to 5 p.m. every day. It was held at the Tobolandia Water Park on the Libramiento. This year it was closer into the water park and away from the dust that we had to experience the past couple of years. The weather was beautiful. Entrance fee was only twenty pesos and it was ten pesos for a ticket to taste the Chili. I went on Saturday. I ran into almost every I knew in town. It was a very successful event.

As I walked into the Chili Cook Off area, I saw and heard fireworks going off. They spelled out the words Anos 35 Years. Exciting display. It sure got my heartbeat going.

I had missed the parade. It started in the six corners area of Ajijic and came up to the Chili Cook-Off grounds. The people on the horses were looking kind of tired by the time they got to the Cook-Off.

There were raffles everyday. People had donated beautiful items and also services. The Cook-Off is the biggest fund raising event of the year. The money raised goes to many different non profit groups here.

There were over fifty five booth scattered throughout the grounds. Some of the art and craft people came from surrounding towns and some were locals. All the items for sale were well presented and reasonably priced. There were also several different booths that served food. 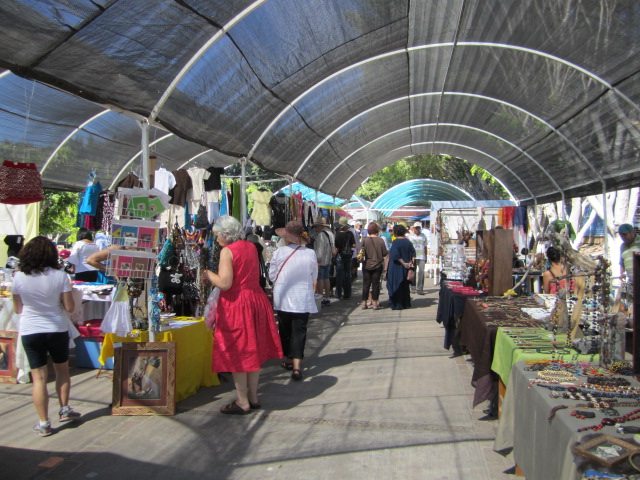 The woman in the photo below is dressed like a duck because she is the official Duck Ticket Seller. Every year the Red Cross has had a special fund raiser at the Cook Off to help with all the expenses of keeping the ambulances running and their clinic in Chapala open. This year they sold tickets for ducks and there was a race every afternoon. Some of the money from the race also helped support the Chili Cook Off. Ducks were 50 pesos each, a duck family of three was 100 pesos, larger families of seven were 200 pesos. Or you could buy a fleet of 50 ducks for 1000 pesos. Each duck was numbered and they were floating in the Tobolandia waters under a bridge. The winners were the ones that floated to the end first. By the way, you weren’t allowed to help them along by touching them. You could cheer all you wanted.

The black pottery in the photo below is from Oaxaca. It is sold in San Antonio. The store is easy to find, next to Super Lake grocery store. The pottery phone number is (01 333) 663 3165.

Below is a photo of the president of this year’s Cook Off, Dave Paterson. He was entertaining the audience with a song. That was much more fun than a long speech.

Below is a photo of the new Mayor of Chapala, Joaquin Huerta.

As you can see from the photo below, the food court was very popular. There were many different choices of things to eat; barbequed ribs, hot dogs, hamburgers, fresh fruit and veggies, Chinese food, and many other things.  And you could be entertained while you were eating.

Carol Bedford and Jerry Mayfield are well known singers here. It was nice to listen to them again.

It takes a lot of volunteers to put on the Chili Cook Off. The ones I saw looked like they were having a great time. Maybe I will volunteer next year.

While taking photos of the event, I came upon a table of Shriners. They too were having a great time. They let me take their photo.

Below is a photo of one of the booths that sold alcoholic drinks. So if you weren’t having a good time, maybe a drink would have done the trick. It was a good crowd. I didn’t run into any drunks.

I loved grilled hot dogs. There was a long line at this stand. They were delicious.

Unfortunately, I didn’t get the name of the woman in the photo below. But I loved her outfit and sunglasses. Mostly, I loved her spirit of fun.  She was willing to pose for me. She didn’t need a drink to loosen up. She was already relaxed.

The Ballet Folklorico de Ajijic Xicantizi did many different dances. Some were traditional and others were more modern.

If all that excitement made you concerned about your blood pressure, you could get it checked for free at the Red Cross booth. Those were serious people, not a smile among them.

After checking your blood pressure, you could get a haircut and raise it even higher with these lovely ladies pampering you. They were raising money for one of the local charities.

From head to toe pampering. Next you could have gotten a pedicure by a professional. This booth was also raising money for one of the local charities.

Below is a photo of the ticket counter for the chili tasting. It only cost ten pesos for the samples and at the end you got to vote on your favorite ones. On Friday the local restaurants had booths and on Saturday the booths were for individuals. There were ten on Saturday:  1. Chili Without Borders 2. Filthy Rich’s Fat Cat Chili. 3. Sixties Chicks Chili 4. Sack it to You 5. Sossi Fossi Picca Chili. 6. Bill’s Chili 7. Lone Star Chili. 8. Charlie’s Chili 9. Culinary Canuck Chili 10. Ranch Style Chili.  I don’t know who won. All I know is that they were all delicious.

Number 1 was my favorite. Chili Without Borders.

After eating all that delicious chili, I found a chocolate booth where I got some free samples. Great Desert. It was from a store that recently opened in Ajijic. Mostly Chocolate is the name of it and it is located at 39 Constitution street.

Below is a photo of one of the many artists displaying their work. And now before going on, I must apologize to all the other artists and crafts people who I didn’t put in this article. There were too many to list. John McWilliams has become one of the most prolific artists in this area. I saw him a few days after the show and he said that he had sold 38 paintings. People love his work. He also helps visitors who come for a short time. He will pick people up at the airport, drive them around town, let them stay at his home and return them to the airport six days later. All for 950 dollars. If you are interested, please contact him at: www.retiringlakesideinmexico.com or call him at 011 52 376 766 0620. He smiles a lot. Nice man.

The car show is shown below but it was very small. At least it was under the shade.

The people in the photo below were taking a break after all the excitement.  The Cook Off was a huge success this year. Hope you can make it next year.